On Wednesday 5th of June 2019, DroneHub GAE from the North of the Netherlands will launch its most recent creation during the ITS European Congress 2019 in Eindhoven: a drone that flies on hydrogen. This introduces a ground breaking innovation in the world of drone technology.

With the introduction of this new hydrogen drone, the flying time of drones can be multiplied up to six times and the drones can be charged faster. This offers many advantages for current and future drone applications within smart mobility. 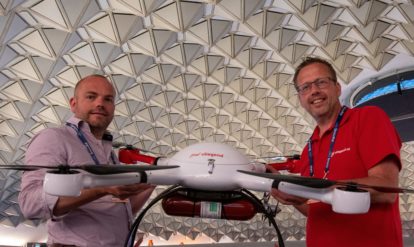 Launch
The drone will be launched on 5 June 2019 during the ITS European Congress 2019 on Dutch Street (stand 3.24). Dutch knowledge and expertise on Smart Mobility applications is presented in Dutch Street. DroneHub GAE falls within the Dutch Street under @North: a collaboration of parties who calls on (public) transport companies, manufacturers and knowledge institutions to come up with affordable, smart, flexible and sustainable concepts regarding autonomous transport.

Integration of drones
The drone is increasingly integrating into our society. Although nowadays often used for photos and videos, the devices offer many opportunities for the rest of the world. At the moment, drones are used in agriculture, during fires and during inspections of buildings and aircraft. In the future, drones may be able to transport our packages or ourselves.

However, there is still much to gain when it comes to the technology behind drones. Multi-rotors (drones with multiple propellers) use a relatively large amount of energy. Nowadays, these drones are able to fly for 20-25 minutes. Not useful for inspection and transportation purposes. In the long term, with the use of hydrogen drones can fly for 1,5 till 2 hours. With this new technology, drones can fly further and also charge faster. Hydrogen technology is a good and sustainable solution for certain types of drones.

This is where DroneHub GAE takes action. Together with companies from the North that work with hydrogen, such as drone-builder Vliegend.nl, the first prototype of the hydrogen drone was created.

Testing
From now on, the idea is to test the hydrogen unit on different types of drones to see what the best configuration is. These tests will take place in the coming weeks. The final step is to eventually offer it for approval to NLR (Netherlands Air and Space Centre) for testing the airworthiness.

At the moment there is no assessment framework for the inspection. This is part of this experiment so that more hydrogen drones can be inspected in the future and drone builders know what to look for when building.